How to grow Asparagus 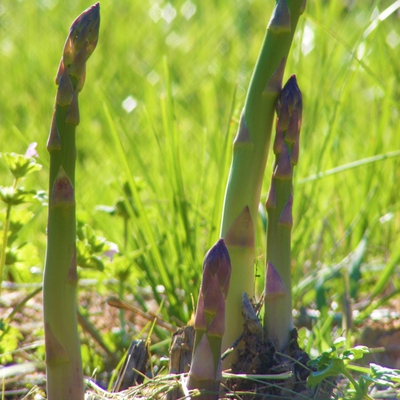 Want to grow your own asparagus? This guide will tell you everything you need to know, from planting to harvesting.

What soil is good for Asparagus?

How much sun does Asparagus need?

How much space does Asparagus need?

Whether planting from seed, seedling or crown, space 45cm apart.

When should I plant Asparagus?

Sowing seeds- Growing Asparagus from seed is more time consuming than planting from crowns or seedlings. Asparagus plants grown from seed require a much longer growing time than if planted from crown (usually takes three years from sowing to harvest). Asparagus seeds will need to be sown indoors 12 to 14 weeks before planting outside.

Soil temperatures for seed germination should be roughly between 21-29°C (70-84°F). Plant out in spring once the danger of frost has passed.

Crown: Asparagus can also be grown from crown (long, fleshy roots). Dig a trench along your pre-prepared asparagus bed 15-20cm wide. Space the crowns on the base of trench around 45cm apart. Spread each crown over its own little mound of soil so that the roots drape down evenly. Cover lightly with soil. Backfill the trench with more soil as the shoots begin to grow. Once the trench is full, mulch with a 3cm layer of light mulch, such as sugarcane mulch. Asparagus crowns can be planted out once soil temperatures have warmed to at least 10°C (50°F).

If planting from seedling or crown, plant out in the early morning or evening and/or on an overcast day. Avoid planting at peak sun times or on windy days, this will allow your plants to settle in comfortably and protect them from windburn and sunburn.

What do I feed Asparagus?

Remove ferns when they die back and feed in late winter or early spring with an organic fertiliser, top dress the soil with a thin layer of compost and mulch with sugarcane or something similar.

When can I harvest Asparagus?

Do not harvest spears in the first year. Harvest in the second year when spears are 6 to 10 inches above the soil line, but before the flower buds open. Spears will appear in spring. Simply cut or snap off the spears at ground level.

What pests does Asparagus get?

What diseases does Asparagus get?

Is there anything else I need to know about Asparagus?

Asparagus is a hardy perennial that will produce for decades.

Asparagus plants develop leafy fronds, similar in look to fennel and dill fronds. These will die down in winter and reappear each spring.

Do not harvest asparagus in its first year of growth as the plant is yet to fully establish itself.